What has SDMBA done for you lately?

Come Dig with Us!

Come Have Fun with Us!

Check our Calendar for Upcoming Events and Meetings 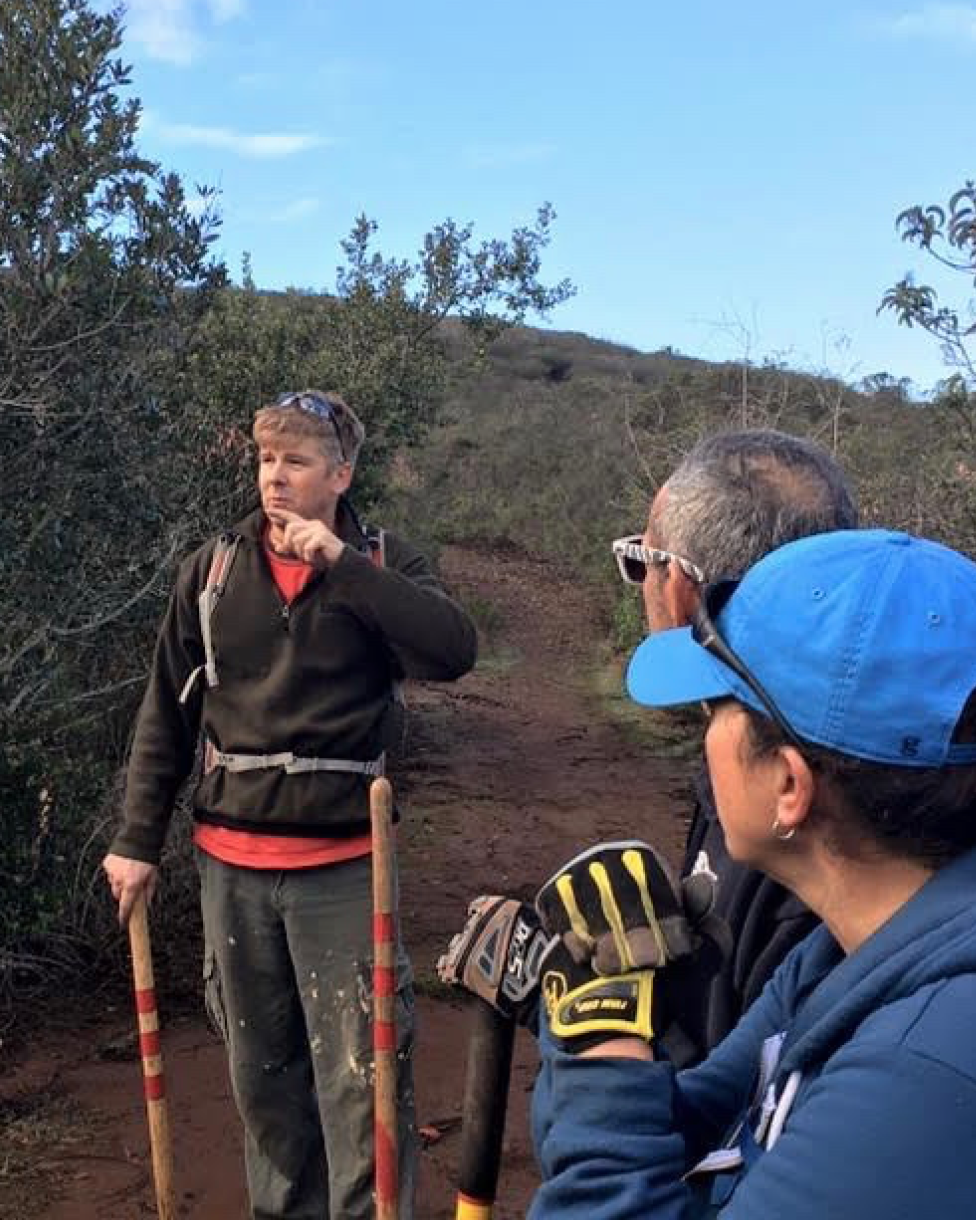 Matt Bartelt - President
matt@sdmba.com
Starting at age 4 with the infamous Schwinn Stingray in the streets around is house in Torrance, CA, Matt has been riding bikes most of his life.
He moved to San Diego in 1988 to attend UCSD and discovered Los Penasquitos and a passion for mountain biking quite by accident.  We used to chase the cattle on our bikes? Matt explained.   The joy of exploration and freedom in open space has kept me captivated ever since!?
He has lived within riding distance of Penasquitos ever since and has seen many changes over the years.  In 2006, he fell into advocacy with the pending closure of the Tunnels in the adjacent Del Mar Mesa.  Over the next decade, he met many of the people who helped create and maintain the San Diego Mountain Bicycling Association.  Matt quickly discovered the joy of trail work and became more and more involved in various events to support trails in San Diego.
In 2012, Matt joined the Los Penasquitos Canyon Preserve Citizen's Advisory Committee with hopes to make changes to the canyon where he began mountain biking.  In 2016, success was realized with the reestablishment of some of the tunnel trails closed in 2008.
Beginning in 2014 with the approval of the Black Mountain Open Space trail plan amendment, a fledgling relationship bloomed with the Rangers there.  Over the next 3 years, he organized and led the completion of nearly 5 miles of new single track, entirely completed by an army of volunteer labor.
Matt's hopes are to continue to build on the successful relationships between city planners, staff, and community official to continue to improve trail opportunities for all mountain bikers and ensure there are sufficient trails for generations to come. 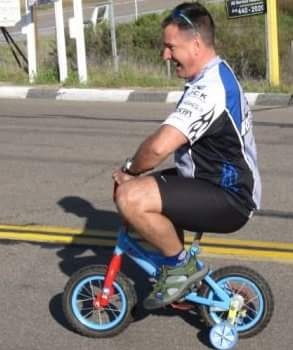 Kevin loves  to ride.  Every trail he sees, his first thought is the ride.  Every mountain range - the ride.  Every obstacle - the ride.  Riding gives him an intense peacefulness he yearns for when not riding.  Living in San Diego allows me to ride year-round - an insane blessing.  Several years ago a favorite trail system was scheduled for closure.  After far too many trails were closed,  he decided it was time to stand-up and do something.  After joining SDMBA, Kevin formed the SDMBA Advocacy Committee.  From there he became a board member.  Realizing change was needed, SDMBA became more proactive and aggressive.  The results have been impressive.  Legal trails are being added to San Diego with agencies asking us to build more!  Membership is at an all-time high and trail user groups are uniting towards more trail.  More importantly - people are standing-up, getting involved.   Kevin is married to his beautiful wife (20 years) who rides. His daughter (12) and son (9) both ride. His favorite trail is Big Laguna and Noble Canyon - but has started to shift towards PQ, Black Mountain and some upcoming legal, epic routes.  His favorite food after a ride is Pho.  His worst crash was on the Stairway to Hell at Noble Canyon.  Broken and bloody, his wife took the opportunity to race me back to the car. To Kevin, most everything is like a ride.  The harder the climb, the better the descent - you only need to pedal for an awesome ride.

Renee moved to San Diego in 2013 after spending 39 years in Denver, Colorado with her family. She has two sons, (one in Mission Beach and one in Colorado), an identical twin sister, and more than 25 extended family members. Her youth was spent camping, hiking, riding motorcycles, bicycles and enjoying the beautiful Rocky Mountains. Mountain biking has been her exercise of choice and passion for many years, and in spite of two broken wrists (one in Moab and one in Colorado), she continues to love riding. Getting to know San Diego county and the many trails it has to offer is a personal goal and one of the reasons for joining SDMBA. Other reasons include growing the sport in our county, advocating prudent trail use, and mentoring our youth.
She brings prior non-profit (board) experience with the Colorado Women's Chamber of Commerce to our board.
Renee has worked as a Financial Advisor her entire career including Merrill Lynch and MassMutual. She is currently an Advisor at San Diego County Credit Union. 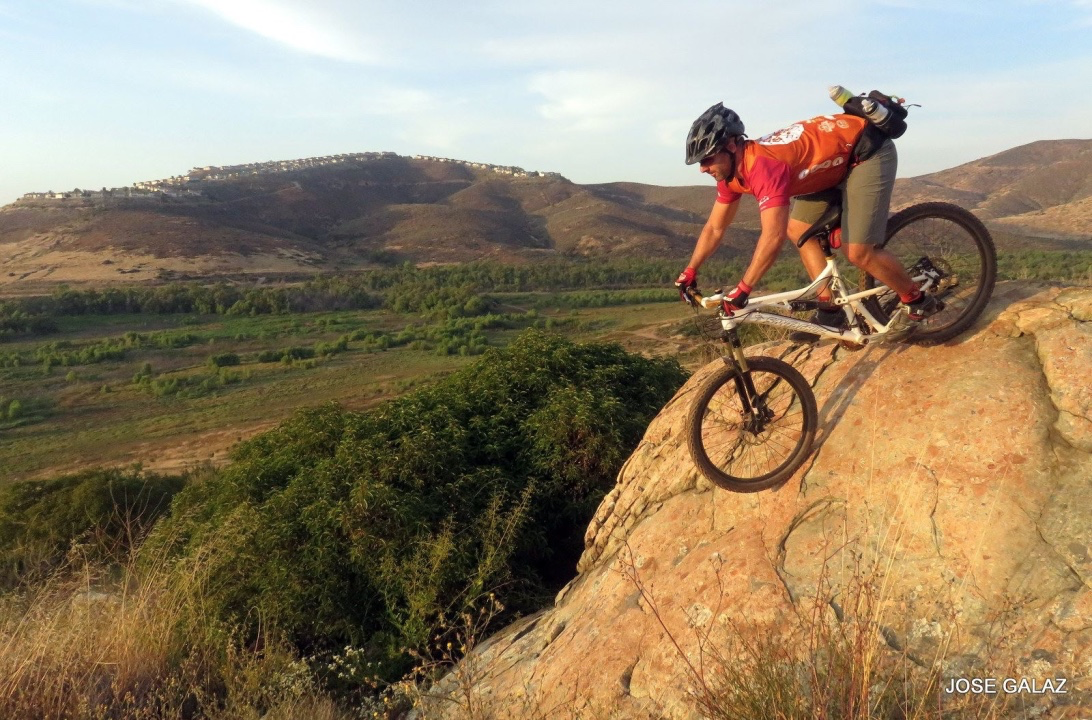 Josh has been mountain biking in San Diego County since his teenage years, learning a love for the sport with his father. After attending college at UCSD, then later Law School at Thomas Jefferson School of Law, he picked up where he left off and starting riding local trials again. In 2012, he started his own law practice, focusing on helping injured and disabled San Diegans fight insurance companies.

With his passion for the law, and riding his bikes, he decided to combine his passions to make San Diego even better. He's recently joined the SDBMA to help in connecting local professionals with the group, find sponsors, and provide legal advice and protection to members. You can usually find Josh shredding the Tunnels at PQ, single track at Black Mountain, or his old stomping grounds around Lake Hodges and Daley Ranch. Josh is excited to bring his passion and knowledge to help SDMBA's mission! 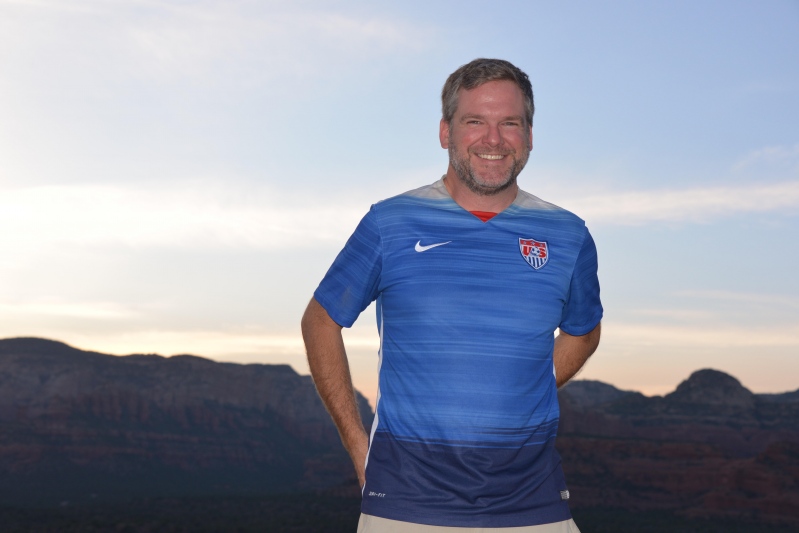 Tim Ingersoll - Media and Communications
tim@sdmba.com
Almost native San Diegan Tim Ingersoll moved here when he was two, and has been biking in and around the region almost ever since. Tim got the mountain bike bug while attending college in the Bay Area and has been an active and avid cyclist ever since. Focused on all-mountain trail riding, nightriding and downhilling much slower than everyone else, he's also an active supporter of the local cycling industry. By day, Tim is communications director at the West Health Institute and an irregular freelancer for various publications in the region. 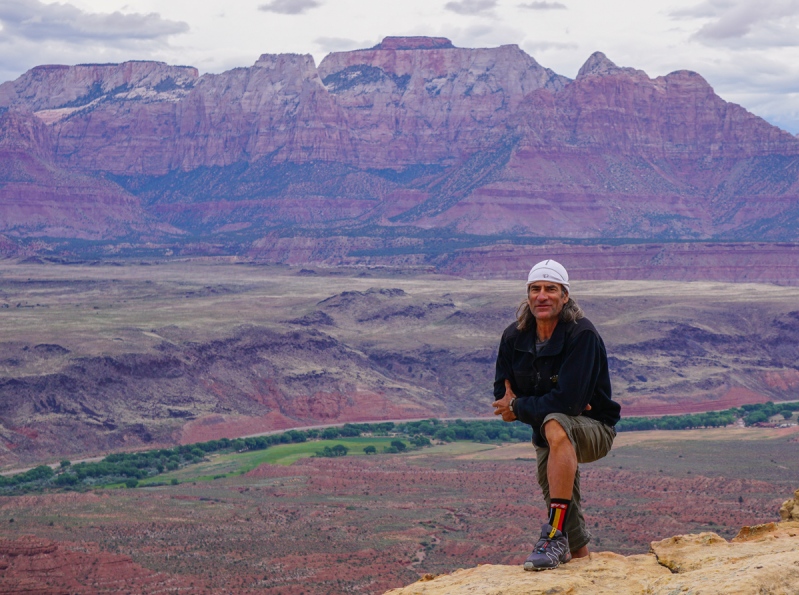 Don is pretty much an outdoor guy.  His early experience began at age 10 backpacking with his dad to the Sierras. Ever since Don anxiously awaits his next mountain adventure with skis, bikes, or dogs.   He has lived in San Diego since 1981 when he started graduate school at UCSD.  Shortly after he became a professional road cyclist logging tens of thousands of miles a year training throughout San Diego County.  He jumped on the MTB wave in the late 80's and for a couple of years was a member of the national team.

As a Board Member and head of the Trails Committee Don hopes to lead in the development of new riding trails, to fight for trail legality ensuring future existence of current trails, and to organize and rebrand the county's amazing riding areas so that San Diego County can truly become a world class mountain bike destination. 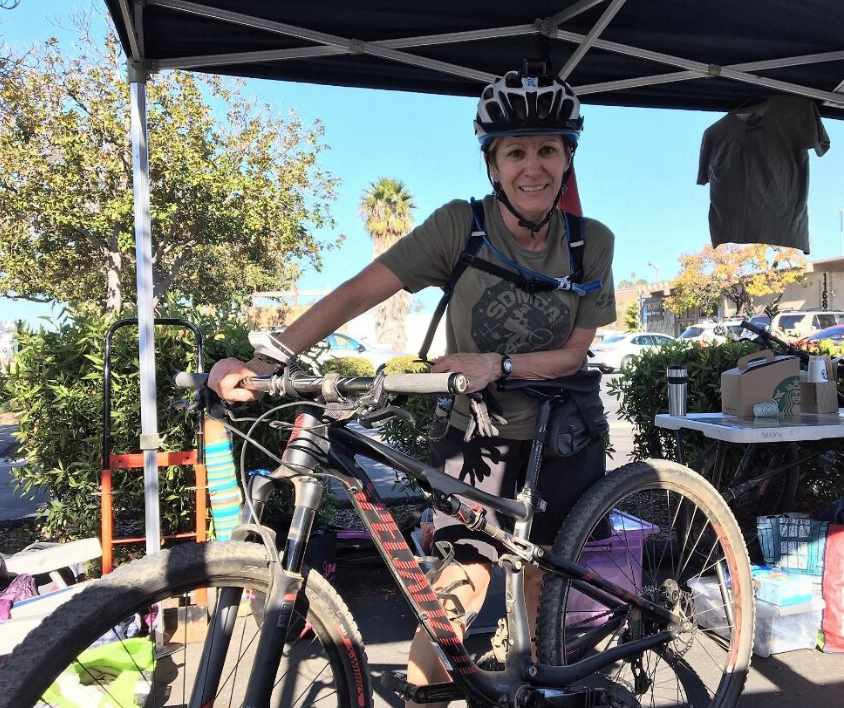 Karen is rather new to mountain biking but was all in from the first ride.

Her introduction to the world of mountain biking was during her son?s first year racing in the NICA High school league in 2014.  The friendliness and fun easy-going attitude of the families and racers drew her in right away. By the end of the season she had her first bike and was on the trails as often as possible.

Wanting to branch out onto new trails and find more riding buddies she went to the internet. MeetUp was a treasure trove of groups and organization. Karen?s first MeetUp group was with Team Ninja?s workout ride at Morley Field. Needless-to-say, she was dropped after the first turn. Karen stayed with it and is now a team member and leading a beginner group every Tuesday night.  She also found SDMBA and to her surprise the trails do need to be maintained and not everyone loved mountain bikers. So, with that revelation, it was time to learn more.

Shortly after attending a few advocacy meetings and the Take a Kid Mountain biking day event she was impressed with the role SDMBA played in our community. Coordinating events was something Karen enjoyed during her Navy years and thought that experience might be useful now.

Karen approached the SDMBA leadership and soon was installed as volunteer coordinator! She took her new role in the organization and the community with passion and commitment. After a few ARCH rides, a half dozen kid?s events, the first Mount Laguna Trail Fest and larger spread sheets, it?s time for the next step. Karen is honored to serve on the board and is excited to be a part of the promising future of bigger and better mountain biking in San Diego county.

Mountain biking has given Karen a new way of life filled with great adventures riding in the great outdoors, wonderful friends and a better sense of community. 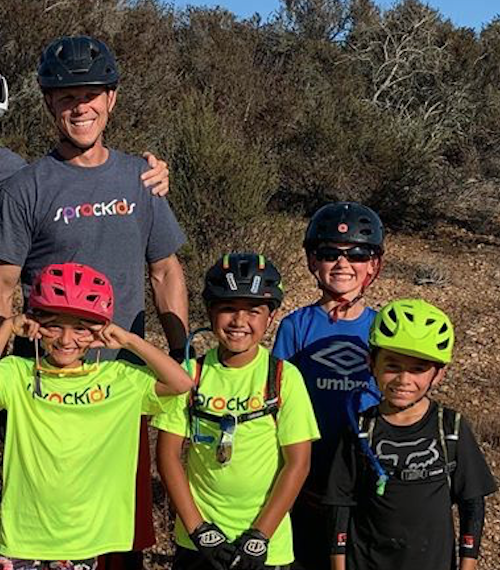 Try riding a bike without a smile on your face; its impossible. Sean found the stoke of mountain biking at a very young age and has been an avid rider since. The fitness, peace of mind and community that mountain biking brings keeps him on his bike regularly. He recently started racing the local Enduro series and enjoys the competition.

Sean, a Southern California native moved to San Diego in 2001 by way of the Navy. He served in OEF and OIF as an Aviation Rescue Swimmer flying in the H-46 and H-60 helicopters. Sean also enjoyed teaching as a surface rescue swimmer instructor which was his last duty before departing the Navy in 2008. Sean earned a degree in real estate from SDSU (Go Aztecs!) in 2010 and has been working as a commercial real estate broker since.

Through Seans efforts as the Leader of Sprockids San Diego, a local youth mountain biking program, Sprockids and SDMBA started to work together. Hosting a number of joint events with SDMBA Sean saw just how remarkable SDMBA is and was excited to play a more active role. He hopes to further the more kids on bikes efforts of SDMBA and Sprockids San DIego and support the organization however possible. 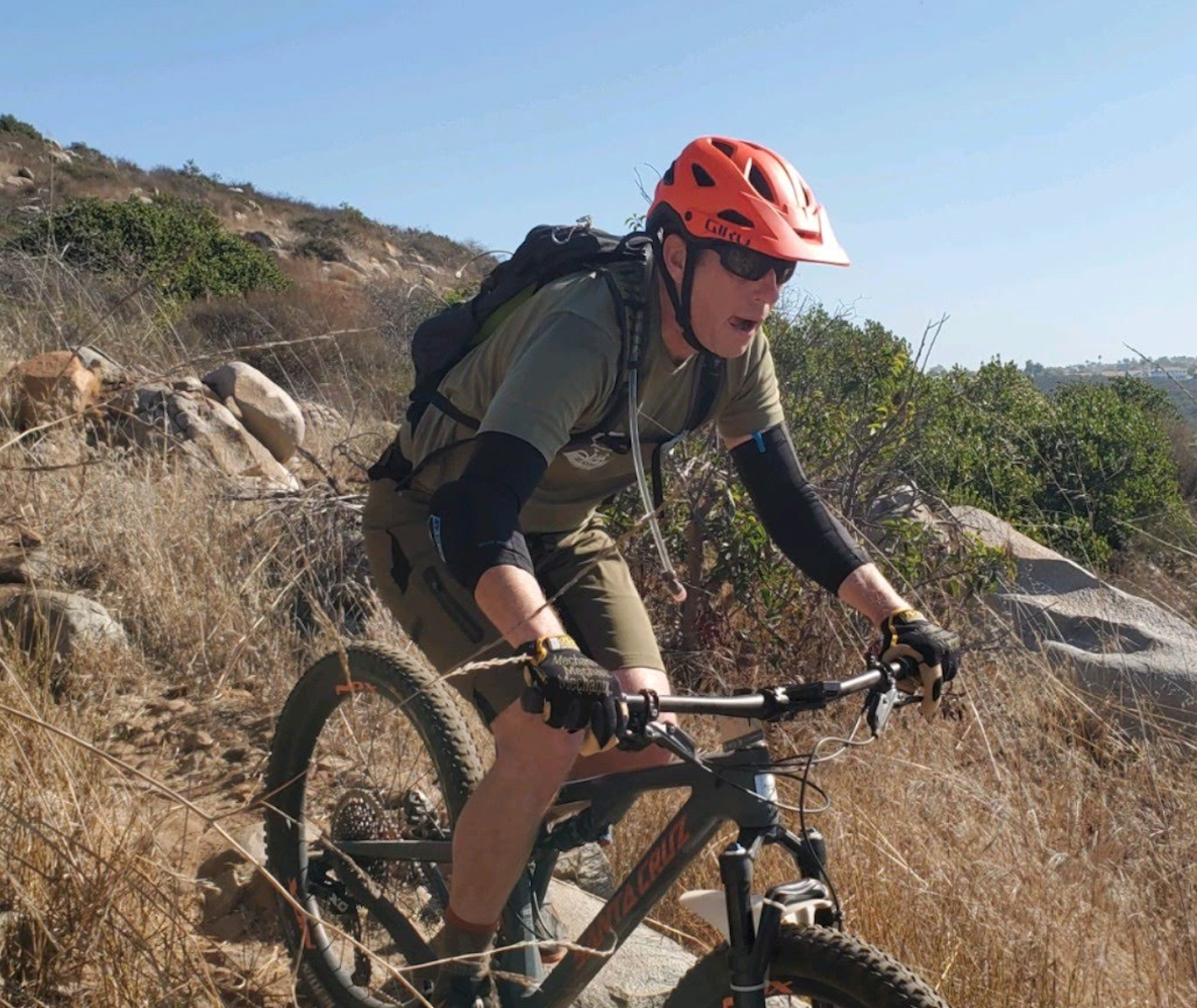 Gerry Krippner grew up in North San Diego County and has been riding bikes as long as he can remember.  He attended college at Cal Poly in San Luis Obispo where he got his first fully rigid mountain bike in the mid 1980’s.  The sport has come a long way since then and he still enjoys riding whenever he can (on a much better bike now).  He rides most of the stuff in North County including some places he can’t tell you about.  He became interested in SDMBA after participating in several Archipelago Rides and while seeing access to his local trails in jeopardy (see above).  He shares SDMBA’s commitment to ensuring access and maintaining trails in all of San Diego County.

Gerry is a mechanical engineer (yes, he’s a decent wrench) and has been involved in business management for most of his career.  His goal at SDMBA is to help ensure responsible use of association resources, improve financial visibility, and help us manage to a clear and concise strategy.

Gerry still lives in North San Diego County with his wife and stoker, Renee.  They have three sons who are now out of the house.  When he’s not riding, you will find him skiing, fishing, or hiking often up in Mammoth Lakes, CA.